The Monitor contains a graphical interface which allows users to interact with it. Currently, the monitor can be accessed via the Hell Bent Monitor Block or an in-built control on the Toyota Console and Sharp Season 13 consoles.

When placed, the monitor will display the following properties of your Tardis:

Right clicking the Tardis Monitor will display a GUI. This allows the owner to view the Tardis’ health and activate certain commands called protocols. 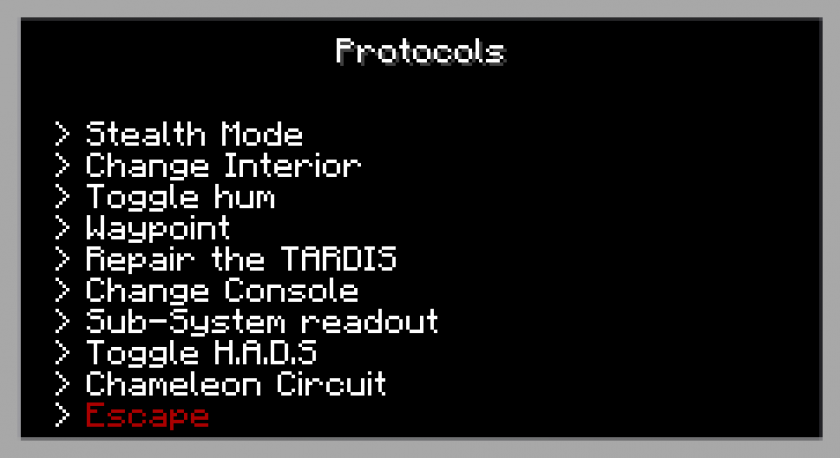 This protocol allows the player's Tardis exterior to become invisible. Players cannot locate the a Tardis with Stealth Mode enabled unless they are able to be obstructed by the exterior.

The protocol can be toggled on and off

For every 5 seconds, the protocol uses 1% of the Chameleon Circuit sub-system

Maximum stealth mode time can be achieved with using the default exterior shell (TT Capsule) and installing a Chameleon circuit with full durability. This provides 500 seconds of Stealth Mode, or 8.33 minutes.

When turned on, the message "Stealth Mode Engaged" will appear above the hotbar.

When turned off, the message, "Stealth Mode Disengaged" will appear above the hotbar. 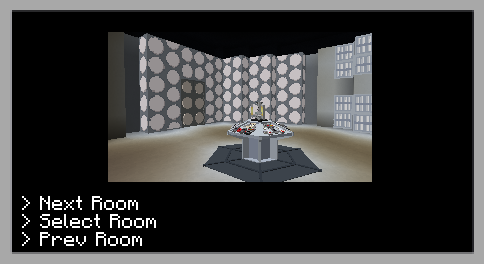 This protocol allows the user to change the console room of the Tardis. This does not use any artron energy. The change is instantaneous. 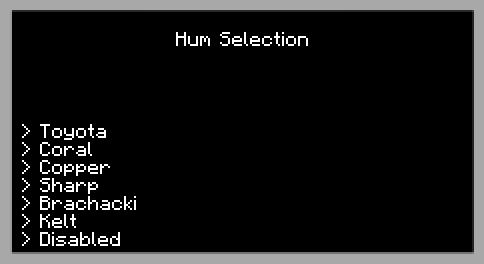 This protocol toggles the Tardis Hum noise and can be cycled through to disable the hum as well. The available hum sounds are:

The name of the hum sounds correspond to the names given for certain Tardis interiors. 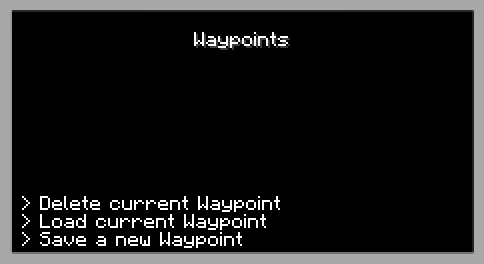 This protocol allows the player to save,delete or load waypoint information for the destination.

Please see the Waypoint Controls for more information on its usage.

This protocol toggles the repairing of the Tardis Hull which is damaged during flight. The repair process requires no resources

When turned on, the message "Tardis is now repairing" will appear above the hotbar.

When turned off, the message, "Tardis is no longer repairing" will appear above the hotbar.

Allows the user to change the Tardis console.

NOTE: The Tardis console controls are located in different positions on each console, be sure to use a Tardis Manual to familiarize yourself with each control. 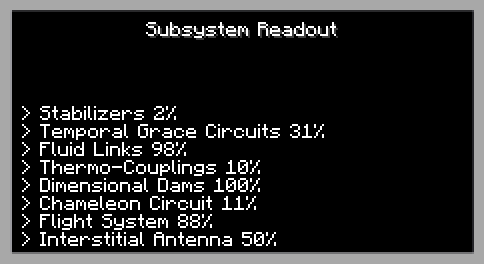 This maintenance option allows the owner to view the health of the Tardis’ sub-systems.

Each system requires the installation of a certain Tardis sub-system component.

The health(durability) of each system is shown by a percentage of full health.

Sub-systems at 0% shows that the specified sub-system is destroyed and requires installation of a new circuit.

The player can remove a sub-system by left-clicking on the desired sub-system. The user will receive a confirmation prompt and cancel the operation if they so wish.

This protocol toggles the Hostile Actions Displacement System (aka HADS). Whenever a projectile hits the Tardis, the Tardis will automatically dematerialize  and rematerialize in a nearby location to prevent sustaining hull damage.

H.A.D.S behaviour changes depending on the installation of Stabilizer Circuits 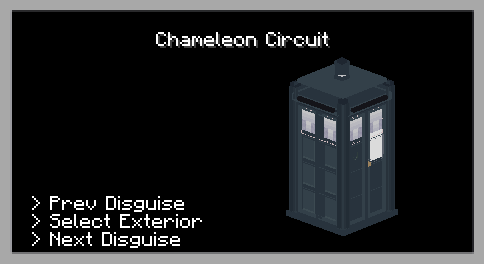 The Chameleon Circuit protocol changes the Tardis exterior. The owner can choose an exterior from a range of ready-made exterior shells.

This requires the installation of the Chameleon Circuit.

*The leaves change colour according to the biome. Note that the leave colour change has some rendering issues and is still a work in progress as of 0.1.0E.

This protocol teleports the player to the world's spawn position in exchange for 10% of the Artron bank capacity. This allows players to exit their Tardis if their Tardis exterior lands in the console room. (In past versions, destroyed Thermocouplings prevented the player from exiting their Tardis interior)

This feature has been replaced with Change Interior protocol in 0.0.9A Patch 1. Switch between different console rooms to 'regenerate' the console room.

This restores the Tardis interior to the default Hell bent interior.

This feature has been removed from versions 0.0.9A+

This activates the double lock, which prevents any entities or players from opening or closing the police box door and therefore entry to the Tardis. To make full use of this, close the police box doors first before activating the Double Lock.

When turned on, the police box doors cannot be opened. No message is shown above the hotbar.

When turned off, the message, "Double lock lifted" will appear above the hotbar and the doors are able to be opened.

NOTE: If the police box doors can be opened and the player cannot exit the Tardis, it is likely that the exterior of the Tardis is facing a solid wall and not the result of an activated double lock.

In this case, the player must land the Tardis in another location or change the direction of the Tardis via the Directional Control.