A Namespaced ID is a term used to describe an object that is registered in Minecraft to ensure there are no conflicts or ambiguity and thus, less issues during gameplay.

Knowledge of this is essential to understanding how mods work.

What exactly does this Namespace ID entail?

It's a combination of two words used by Minecraft to determine what an object is.

The general formatting of this is:

The Namespace is the name of a programming project and used to help programmers and users know where this object came from. However, in the specific context of Minecraft, Mojang's naming conventions dictate that this is all lowercase.

An example of this is an object that has the namespace of "immersiveengineering". When Minecraft is adding or getting information from an object in its game, it will know, "Ok, this object is coming from a project called Immersive Engineering and not Minecraft's original project"

The namespace is required to be all lowercase according to Mojang's naming conventions.

The Registry Name is the specific name used by the object to let us know what the object is.

An example of this if you see an object that has the registry name of, "lead_ore". When Minecraft is adding or getting information from an object in its game, it will know, "Ok, this object is called lead_ore and not something like grass_block".

The registry name is required to be all lowercase according to Mojang's naming conventions, and different words are often seperated by an underscore.

When and How do we use it?

An example of this being used is finding which mod a block has come from.

Say, you find the Namespace ID of a block called "immersiveengineering:lead_ore".

Using our knowledge of Namespace and Registry name, we now know that this block comes from a project called "immersiveengineering" and the registry name of this block is called "lead_ore".

To find the Namespace ID, the easiest way to find this is ingame.

When you load up the game, press the keys F3 and H. This will turn on Advanced Tooltips mode, which allows you to see more information if you hover over an item in the inventory GUI.

You may notice that when you hover over an item with Advanced Tooltips Enabled (F3 + H), you will see two articles of text. 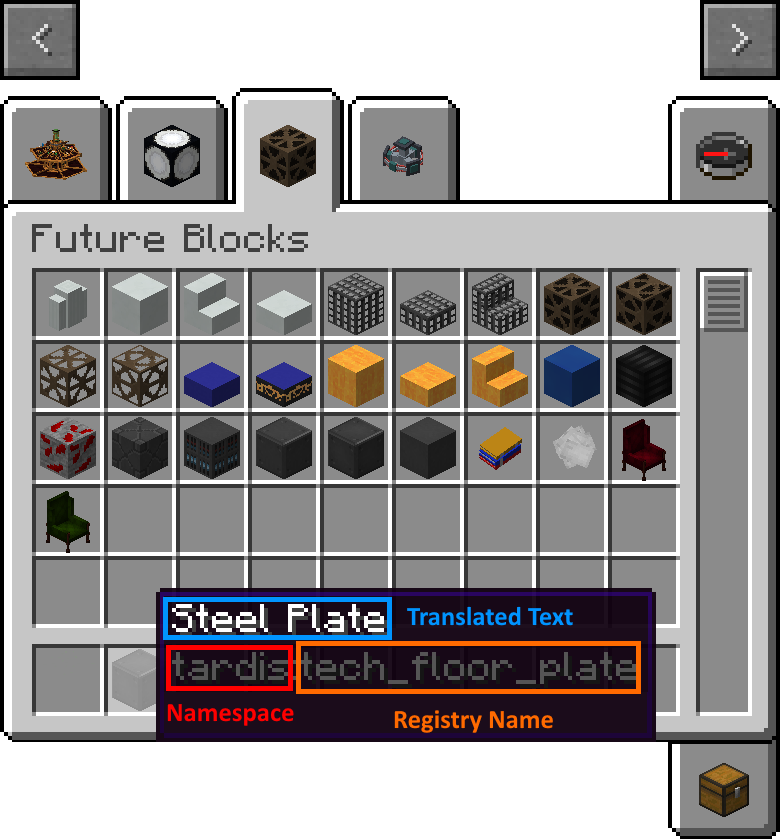